Past activities from FEVR 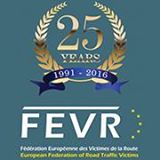 1. UN Global Road Safety Week: Some of our members had organised events in their countries

Gerdine Westland from Rondpunt & Donna Price from IRVA were hosting a workshop during the VSE Conference (Victim Support Europe) in Dublin 18.5.: about needs of road traffic victims
A report by Gerdine will come with next CoMe

4. As a member of the UNRSC (UN Road Safety Collaboration) Forum we were asked by WHO to send our main activities ( sept.2016- may 2017) as input to the UN GS report who is in preparation:
→More in Annexe

As already announced in a former mail our members are warmly invited to participate to a survey organised by Rondpunt with a Consortium where we are associated: http://bit.ly/2ong0gs

I wanted to produce similar sheets with quotes from our board & all members, if you send me a picture + quote + your Logo, I can insert it and publish them on our social media/NL etc thx
more

Annexe: World Day of Remembrance for Road Traffic Victims (WDR) 2016
As every year, FEVR proposed the WDR theme for agreement by the UNRSC and Global NGO Alliance. The theme for WDR 2016 was based on Pillar 5 of the Global DoA Plan: “Vital post-crash actions: Medical Care, Investigation, Justice!” FEVR again produced a poster and video reflecting the theme and offered it to all organizers of World Day events, translated into their languages and with their logos added. Over one hundred posters were distributed throughout the whole world, publicising not only the World Day, but also the post-crash actions that are so important to all bereaved and injured road crash victims.

Under the responsibility of FEVR, a new WDR structure is being set up – with an Advisory Board of road traffic victim delegates from all continents and WDR Ambassadors representing all different stakeholders. The aim is to ensure widest possible publicity of the World Day and the reasons for its existence in order to help reduce the global road death and injury toll.

WDR 2017 – the theme, based on Pillar 1 and the SDG 3.6, has been agreed: “2020 Target: reduce road fatalities AND serious injuries by 50%*”*Sustainable Development Goal 3.6 Thanks to financial support from the FIAfdn, FEVR will again develop a common poster and video, made available for free to all stakeholders who want to observe WDR 2017.

FEVR was also busy on the 5th Pillar of the DoA, speaking on conferences and meetings in Europe and globally - for example hosting a Post-Crash Response Symposium during the GA GM in KL and being invited to speak on this topic at International Conferences . In Europe, Post-Crash is also higher on the agenda thanks to different research projects.

The MyLAc (My life after the crash) online survey in partnership with BRSI and the current ETSC Revive project about best practices EMS.


In the European Commission’s Valetta Declaration resulting from the Meeting of Transport Ministers in Malta, where FEVR was among other Stakeholders (FIA, ERSC, IFP,ECF…) actively involved, the Post-Crash actions are now also included. (corrected/amended by BC)
Σχόλιο από Ε.Υ.ΘΥ.Τ.Α. - Παράρτημα Ρόδου στις 30.5.17