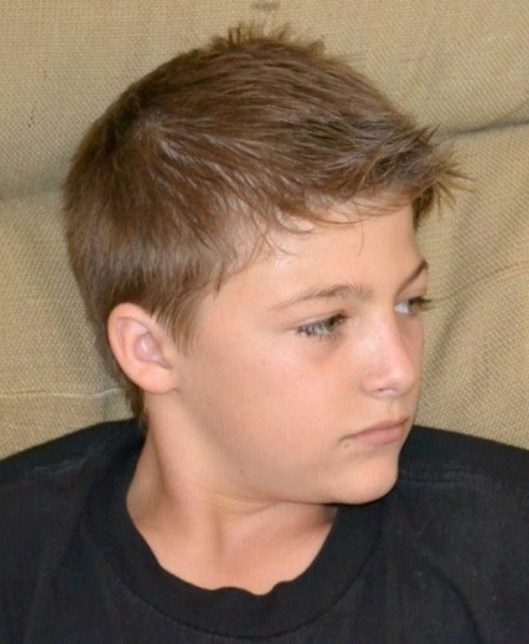 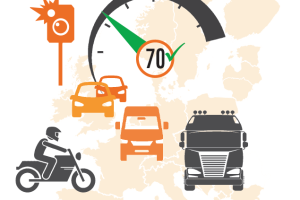 Brussels – Minimum road infrastructure safety standards will be extended to national roads across the EU in a significant boost for road safety, following a provisional deal on new legislation agreed today.

A revised version of the rules agreed today would extend these measures to all motorways, all “primary roads” and all non-urban roads that receive EU funding.  ETSC, and other organisations, have been calling for all main urban and rural roads to be covered.  But EU policymakers representing the European Commission, Parliament and Member States did not agree to extend the mandatory rules that far, though countries will still be able to go further if they wish.

According to research for the European Commission, the proposed measures could save 3,200 lives and prevent more than 20,000 serious injuries over the period 2020-2030.

“This legislation contains the introduction of new procedures that will lead to better road design, better safety management, and more high risk sites being treated.  Ultimately we would like to see this approach applied to every road in the EU – but this deal is nevertheless an important step forward.“

Road authorities will be able to choose some low-risk roads, or roads with little traffic to opt-out of the legislation.  However, those decisions will be subject to oversight from the European Commission, who will also publish a map of roads covered by the rules.

For the first time, the legislation will also require road management authorities to take into account the safety of vulnerable road users, such as pedestrians and cyclists when planning and managing road infrastructure.

Brussels – A key committee of MEPs has given the green light for a range of new mandatory vehicle safety standards that could apply to new vehicle models within three years. The European Transport Safety Council (ETSC) welcomes the result of the vote but warns that time is running out for a final deal on the legislation before European Parliamentary elections in May.

Members of the European Parliament’s Committee on Internal Market and Consumer Protection (IMCO) voted today to approve a range of new vehicle safety standards initially proposed by the European Commission in May last year. The measures include new crash testing requirements, mandatory installation of driver assistance systems including Automated Emergency Braking (AEB) with pedestrian and cyclist detection, overridable Intelligent Speed Assistance (ISA) and Emergency Lane Keeping, as well as a new direct vision standard for lorries and buses to enable drivers to have a better view of other road users around their vehicle.

The requirements also include installation of Event Data Recorders, which record critical information on the status of a vehicle in the moments before a collision and, as in the aviation sector, could help crash investigators understand the causes of collisions in order to help prevent them in the future.

“This legislation represents a major step forward for road safety in Europe, and could save 25,000 lives within fifteen years of coming into force.  But it will only apply to new vehicles.  So it’s incredibly important that a final deal is reached as soon as possible, so cars with these new safety features fitted as standard start driving off production lines sooner rather than later.

“We want to thank MEPs, and in particular Róża Thun - the MEP responsible for the file, for working long and hard to come up with a text that a majority could support.  Final negotiations between the Parliament, Member States and the European Commission should now begin as soon as possible.  Minimum vehicle safety standards in the EU were last updated in 2009, so there is no time to lose.  We urge policymakers to do their utmost to achieve a final agreement before the European Parliamentary elections in May.“

Brussels – Speeding remains a significant problem in many European countries according to new research published today by the European Transport Safety Council (ETSC) ahead of an important vote in the European Parliament on Thursday on future mandatory in-vehicle safety technologies.

The researchers looked at the numbers of vehicles found to be driving above the speed limit on different road types in the countries that were able to provide such data.

On urban roads, where 37% of all EU road deaths occur, the researchers found that between 35% and 75% of vehicle speed observations were higher than the legal speed.

On rural non-motorway roads, where 55% of all road deaths in the EU occur, between 9% and 63% of vehicle speed observations were higher than the speed limit.

On motorways, where 8% of all road deaths in the EU occur, between 23% and 59% of observed vehicle speeds were higher than the speed limit.

Speed is a major factor in overall road safety performance.  Excessive and inappropriate speed is accountable for about one third of fatal collisions and is an aggravating factor in most collisions.

While reducing speeding will require a combination of measures including higher levels of enforcement, improved infrastructure and credible speed limits – the authors singled out Intelligent Speed Assistance (ISA), a driver assistance system available today, as the key in-vehicle safety measure for tackling the problem.

On 21 February, the European Parliament’s Internal Market (IMCO) Committee will vote on critical new EU vehicle safety standards which include a proposal to make overridable ISA a mandatory technology on all new vehicles from 2022.  It is estimated that this single measure could eventually reduce deaths on European roads by 20%.  The entire package of vehicle safety measures is expected to prevent more than 25,000 deaths between 2022 and 2037, but only if it is adopted in its entirety.

Graziella Jost, Projects Director of the European Transport Safety Council (ETSC) said:
“500 people die every week on EU roads, a figure that has refused to budge for several years.  And driving too fast is still the number one killer.  It’s very simple: if we want to bring down the number of road deaths, we have to tackle speed effectively.  Right now, the EU has a once-in-a-generation opportunity to make a massive difference.  Including overridable Intelligent Speed Assistance (ISA) on every new vehicle as standard could eventually prevent a fifth of road deaths.  We urge MEPs to back this essential life-saving measure.”

The new report also highlights speed-related measures currently being implemented across EU Member States.  In particular, it noted some progress on reducing speeds on rural roads.  France recently cut the speed limit on rural roads without median barrier from 90km/h to 80km/h.  An initial analysis by the research institute Cerema showed 116 fewer road deaths on rural roads limited to the new 80km/h speed limit compared to the 2013-2017 average on the same roads for the months July to December, the period since the new limit was introduced.  Spain has also announced a shift from 100km/h to 90km/h for its high speed rural road network while Flanders, the northern region of Belgium, also switched from 90km/h to 70km/h in 2017.

Some of the countries with the best safety records in Europe have lower standard speed limits on rural roads. Including Sweden at 70km/h with 27 deaths per million inhabitants. Norway (26), Switzerland (26), Denmark (37) and the Netherlands (37) all set the limit at 80km/h.

The researchers report that a combination of mobile roadside police checks together with automated stationary enforcement, including fixed and average speed or time-over distance cameras, has proved to be an effective tool in addressing speeding.

In general, there appears to be an overall increase in speed offences detected throughout the EU, mainly due to the extension of safety camera networks. Nevertheless, there are big differences between Member States regarding their number of speed cameras.

Out of the 27 countries that could provide data on the number of speeding tickets issued over the period 2010-2017, the figure went up in 18 countries while 9 registered a decrease.

The report can be downloaded from www.etsc.eu/pinflash36

What are MEPs voting on this week?
The update to the EU’s General Safety Regulation for motor vehicles was proposed by the European Commission in May 2018, as part of a package of new road safety measures, and includes a number of new mandatory technologies such as Automated Emergency Braking (AEB) and an overridable form of Intelligent Speed Assistance (ISA), to help drivers keep within the speed limit.  The measures also include improvements to passive safety (crash protection) and a new “direct vision” standard for lorries to give drivers better visibility of the road (and other road users) around them.

What is Intelligent Speed Assistance?
ISA uses a speed sign-recognition video camera and/or GPS-linked speed limit data to advise drivers of the current speed limit and automatically limit the speed of the vehicle as needed. ISA systems do not automatically apply the brakes, but simply limit engine power, preventing the vehicle from accelerating past the current speed limit unless overridden by the driver. Vehicles with this kind of ISA system factory fitted are already on sale – helped in part by  Euro NCAP’s decision to reward extra points for vehicles that include ISA. The system is fitted as standard on the new Ford Focus for instance. See: www.etsc.eu/isa

What needs to happen before the proposals become law?
The new law needs to be approved by both the European Parliament and representatives of the 28 EU governments. Negotiations to agree a final legal text, known as trialogues, will likely begin soon based on the outcome of the vote in the Parliament’s IMCO committee.  EU Member States already set out their initial position on the law in an agreement reached in December. 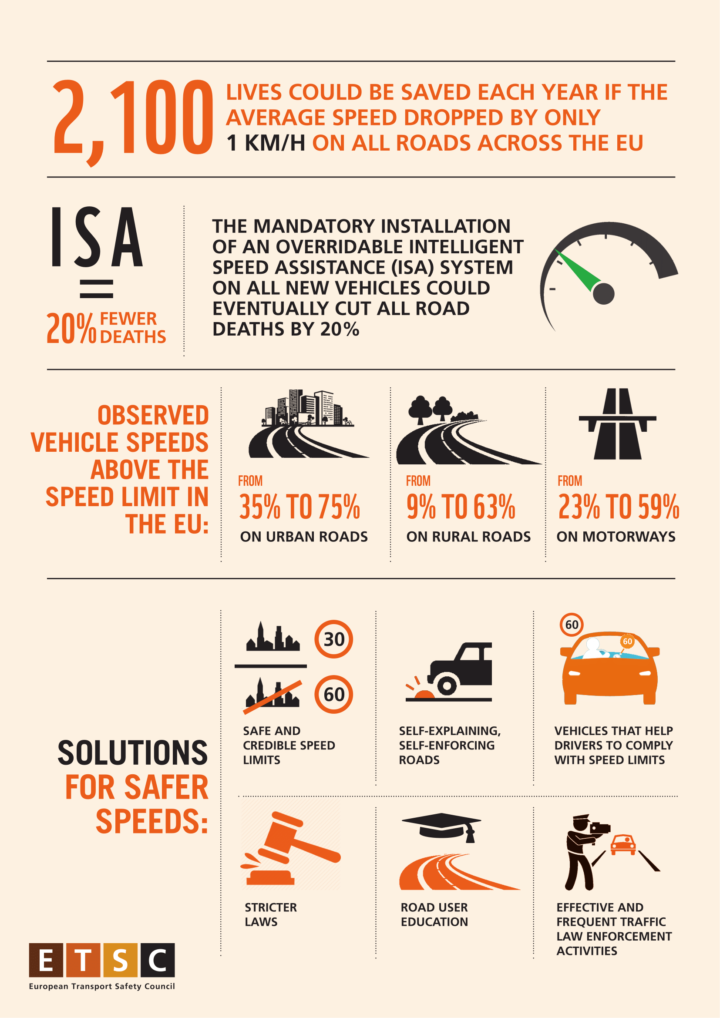 This report is published as part of the ETSC Road Safety Performance Index (PIN) Programme which receives financial support from the German Road Safety Council (DVR), Toyota Motor Europe, the Swedish Transport Administration and the Norwegian Public Roads Administration. The contents of the report are the sole responsibility of ETSC and do not necessarily represent the views of the sponsors.