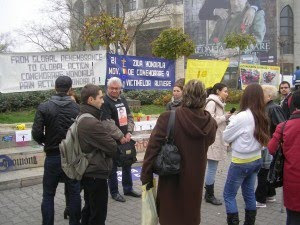 WORLD DAY OF REMEMBRANCE FOR ROAD TRAFFIC VICTIMS.
ROAD TEARS - ROMANIA 21.11.2010.
Dear Mrs Eleni Karidi
President Hellenic Association for Road Traffic Victims Suport
On this occasion we commemorated in Bucharest the over 62,000 victims who died in road traffic crashes over the past 20 years.
Personally I am the victim of a serious road traffic accident, which left me disabled in clutches for the past 13 years, and I came to know tens of grieving and mourning families, and therefore I became involved civically and publicly, organising some public activities to support them for the first time in Romania. I drew the attention of state institution to the large number of „manslaughter” crimes, as well as the fact that the „road assassins” are favoured by the coruption phenomenon (as in my case), as well as by the permissive legislation whereby the authors of road crashes are sentenced by suspension, which means to..freedom! One representative example proving that the life of victims is worthless to the judges and that the guilty ones are „legally” favoured is that in 2009, out of 318 „road assassins”, only 33 were sentenced to serve in prison, the rest received symbolic sentences by suspension.
The project maintains that, unfortunately, in Romania there is no „REAL ROAD TRAFFIC JUSTICE”, as would be the case in the European Union, whose member Romania is, as in EU the guilty are effectively convicted.
Initially, the project which started as early as 2001 was aimed to protest against the abuses committed in the act of justice over the thousands of victims of the road traffic „genocyde”, in which thousands of innocent people die and other thousands are left disabled, leading to unfair criminal trials, but when I learned, in shock, that approximately 3000 PEOPLE die yearly in Romania, we decided to commemorate these victims yearly by naming the project „ROAD TEARS”.
The project of a victim of a road crash, who also became the victim of an unfair legal trial, in which I came to know the phenomenon of corruption, but also abuse and crimes in the act of justice over 13 years of nightmare, is appreciated by the Ministry of Internal Affairs, Vasile Blaga, as well as by the former Head of EU Delegation Jonathan Scheele (UK) and many others and in 2006 project „ROAD TERAS” was granted the Special Award.
At a European level, the project is known and appreciated by various high profile personalities such as the President of the European CommissionManuel Barroso, and by participating in 2009 in the NGO Road Safety World Conference at the invitation of WHO which took place in Brussels on May 7-8, project „ROAD TEARS” became known to more institutions, organisations and specialized associations well known throughout the world. On this occasion we signed the Appeal and Final Declaration of participating NGOs, the project being the only one to be invited from Romania.
Project „ROAD TEARS”, initiated as original civic and public involvement anticipated by 6 years the Government Ordinance no. 864/01.08.2007 which officially establishes the commemoration of road traffic victims in Romania, as well. In the first years of running this project I was supported morally by the late Prof. Marcel Haegi, President of FEVR- European Federation of Road Traffic Victims, and afterwards by the current President, Mrs. Brigitte Chaudry.
The offsprings of the deceased are unhappy with the way the authors of road crashes are treated, as well as by the inhuman treatment they, as offsprings of the deceased, receive in the act of justice, and the constant delay of trials.
Project „ROAD TEARS” which advocates for severe and efficient measures to reduce „the road traffic genocyde” and setting Road Safety as national priority, considering that thousands of PEOPLE are killed annually, among whom very many children and young people, is not liked and supported by the specialized state institutions, also due to the critical atitude from the lack of road traffic infrastructure, of education, of road traffic civility, of the presence of corruption, from granting drivers licences to providing a solution to road tragedies in justice. We are glad to see that, as compared to 2009, the number of road traffic deaths in Romania began to decline. The crucial role, in addition to the mesures which were taken yearly by the specialised state institutions, was held by … the economic crisis, which reduced the intensity of road traffic through consequences which were documented statistically.
On Sunday, November 21 2010, with the support of Road Traffic Police Department, we commemorated the over 62000 of people who died between 1990-2000, on the occasion of WORLD REMEMBRANCE DAY FOR ROAD TRAFFIC VICTIMS, we offered flyers and lit candles and brought flowers and shed, from our grieving hearts, a „roadtear” in the memory of those who are gone.
STOP ROAD TRAFFIC GENOCYDE IN THE WORLD!
FROM GLOBAL REMEMBRANCE TO GLOBAL ACTION.
Best regards,
Cornelia Galavan
ROAD TEARS
ROMANIA
Σχόλιο από Ε.Υ.ΘΥ.Τ.Α. - Παράρτημα Ρόδου στις 3.12.10