A drunk driver who crossed the centre line of a main road over 20 times endangering other drivers has been disqualified from driving for 20 years.

Cork Circuit Court Judge Seán Ó Donnabháin said that if he could have he would have disqualified Daniel Culhane for life.

He also sentenced the 30-year-old, with an address at Owenahincha, Rosscarbery in Co Cork, to four years in prison with one year suspended.

"We are all lucky even more dreadful consequences didn't occur," the judge remarked at Culhane's sentencing hearing.

The father of three pleaded guilty to 10 charges, including endangerment, whereby he created a substantial risk of death or serious harm at four locations around Enniskeane - at Dromovane, Teadies Lower, Murragh and Palaceanne - on 16 December 2020. 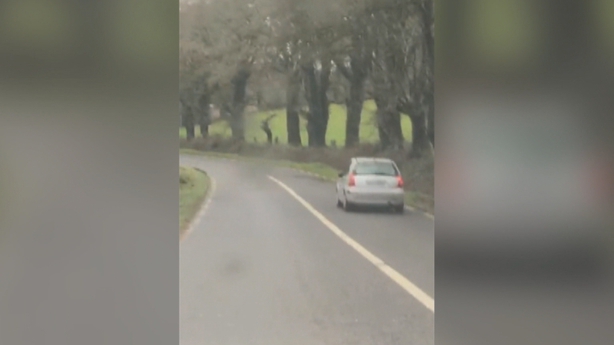 He also admitted dangerous driving, threatening to kill a man at Teadies Lower, producing a baseball bat while making this threat and causing criminal damage to a vehicle.

Culhane also pleaded guilty to burglary at Supervalu in Dunmanway and causing criminal damage to a glass panel of a rear door, as well as stealing ten cans of cider at Kevin O'Leary's garage in Bandon.

Finally, he pleaded guilty to drink driving and having no insurance or licence.

Mobile phone footage shot by a passenger in a car travelling behind Culhane as he drove along a 2.5km stretch of the road, at approximately 10.25am on 16 December, was shown in court.

Judge Ó Donnabháin remarked that the driving appeared "exaggeratedly slow because of a complete lack of control by the driver" and that Culhane "was significantly out of control on the day in question".

The court heard that Culhane was "shouting, roaring and threatening everyone", when he was detained by members of the public on the outskirts of Enniskeane before gardaí arrived at the scene.

Detective Garda Manus O'Donnell of Bandon Garda Station said Culhane told them he had no recollection of the incident except for paying for the cans of cider in the shop.

Defence barrister Dermot Sheehan said his client wanted to apologise to those who had been affected by his behaviour.

The court was told that Culhane had 53 previous convictions, including drunk driving and burglary and had been on bail at the time of the incident.

Judge Ó Donnabháin sentenced him to four years in prison, suspending the final year, and disqualified him from driving for 20 years.